Tajikistan - Mysterious gateway to the roof of the world

As an independent Tajikistan in appearance occurs for most after the collapse of the Soviet Union in the 1990s. Where Afghanistan protrudes with its northeastern corner on the northern border of Pakistan, the relatively small Tajikistan joins the north with its capital Dushanbe on. Although the shape of its border is pretty frayed, but roughly speaking, that the maximum east-west distance in about 680 km, and the maximum north-south extension be about 500 km. Tajikistan is framed by China in the east, Kyrgyzstan to the north, Uzbekistan to the west and Afghanistan just to the south.

If you already guessed that the Kashmir mountains lies barely 200 km away, aware of the magnificent and varied landscape of Tajikistan. It is the land of high mountains, huge water resources, imposing glaciers and most colorful women's clothes in the center of the largest continent in the world: Asia. The nature-loving visitors can here over tranquil mountain lakes, rushing mountain streams, powerful folded anticlines and gray granite giants, then marvel again over large, colorful flower meadows times over barren, inhospitable lunar landscapes on the vast plateaus and.

Since 1991 the former Soviet republic is an independent state in Central Asia. Its total area is 143,000 square kilometers with a well in approximately twice the size of Bavaria. More than 90 percent of the national territory may be described justifiably as high mountains, is still more than half of the country at 3000 meters and above. The enormous mountain ranges have names like Hissar Allaya, Tien Shan and Pamir.

In the east of the mighty Pamirs, the summit of which exceed the 7,000-meter mark playing dominated. There are then extended glacier systems. Pik Somoni (7495 m above sea level) and about 70 km long, up to 3 km wide Fedchenko Glacier still belong to Tajikistan, which has about 60 percent of the water resources of Central Asia.

While there are no volcanoes in Central Asia, but due to the collision of the Indian subcontinent against the Asian bloc, which has led to Auftürmung of the Himalayas, it is occasionally in Tajikistan strong quake events with magnitudes greater than 7. The geological activities underground making their presence felt among others as hot springs (up to 90 degrees Celsius) as well as mineral and sulfur springs. They say these waters promote fertility (fertility) of women. especially well known are the sources of "Garm-Chashma" and "Bibi Fatima" in Pamir. "Obi Garm" is located in a region near Dushanbe.

About one percent of the land is covered by a total of approximately 2,000 lakes of different origins. The largest lakes Karakul, Sarez and Zorkul are in Pamir. Despite the abundance of water only a few areas for agriculture are due to the steep mountain flanks.

Tajikistan in letters and numbers

With about 780,000 inhabitants, Dushanbe is the capital and the most populous city in the country, which boasts a total of 9 million inhabitants (2017). Of these, 83 percent Tajik, 13 percent Uzbeks and the remaining four percent are divided into Kyrgyz, Russians and Pamiri. For example, while Pamiri are Shia Ismaili (5%), are about 90% of residents in the Sunni Islam. Christians make up with about three percent in Tajikistan a clear minority.

Consul of the year comes from Tajikistan

With statistically 2.7 children per woman (2016) in about one-third of the population is younger than 15 years. Thus, Tajikistan can appreciate the youngest and fastest growing population in Asia.

At the beginning of the 20th century Arabic characters were used in Tajikistan yet. The integration into the Soviet Union, there was first to introduce a slightly modified Latin alphabet to finally put entirely on the Cyrillic script. Since the pronunciation sometimes deviates there some of the usual Russian sounds, or special characters were also introduced. The original Tajik language is as inspired today's Farsi ans Persian. It so happens that Tajiks, Afghans and Iranians can talk fairly easily.

When the climate is particularly pleasant

Far away from all coastlines Tajikistan is dominated by a strict continental climate. This means extremely hot summers and icy winters, with the daily variations in temperature are quite remarkable in the high altitudes. And where there are high mountains, often more clearly demarcated climates form off. After the cold winter, quite rainy, but short spring sets across the country. Then a very hot, dry summer assumes the regiment. The beautiful autumn is still dry and warm, and then rather abruptly to solidify in the wet, cold and frost.

Nevertheless, we must not forget that we are here to just north 37 degrees latitude, that is on the same latitude as the southern Spanish Andalusia located. Who ever got to know the summer sun of Andalusia and imagines to walk around in 3,000 m altitude, understands determined that can be expected in Tajikistan with very intensive solar radiation. And who knows the mountains, may have been living ever longer period in Switzerland or Austria, knows that in such a landscape are sudden, violent weather changes on the agenda.

The larger towns Khudschand, Pendschikent and Dushanbe You can visit well technically climate from April. But the month of October, and even the first half of November lend themselves to such a city break. The Pamir Highway you can only sail in May actually reckon there but always with extreme weather conditions. In the highlands of the Pamir really put uncomfortable autumn storms ever in October. For mountain tours in the high mountains You better plan by mid-September, the period between mid-June, provided a really good equipment.

The earliest finds of human activity on the territory of Tajikistan date back to the Stone Age. In 339 BC, Alexander the Great founded the settlement Alexandria Eschate, today's Khujand in northern Tajikistan. Later there ruled Arabs, Samanids, Turks and Mongols. 1275 Marco Polo traveled in the region to move on to China. The Emirate of Bukhara called the region of Tajikistan since the Middle Ages and its own in the 19th century Tajikistan came under Russian influence. The Archaeological Institute employs currently in cooperation with the Academy of Sciences of Tajikistan with excavations in Panjakent, Turbuloq, Farchor, Hulbuk and Khovaling to understand especially the Hellenistic phase of this area better. From 1929 Tajikistan was an independent Soviet republic.

The residents of Tajikistan are considered particularly open-minded, hospitable people. At the Fedchenko Glacier is about 30 families have joined forces to bring closer the spectacular mountains of Tajikistan under the umbrella of "Pecta", an association for eco-tourism, the guests of the country. The Pamir National Park was rightly taken (World Heritage Site and World Heritage) UNESCO in the World Heritage List. A particularly popular destination is located right near the capital, Dushanbe. It is the surrounded by the scenic mountain landscape Nurek reservoir. 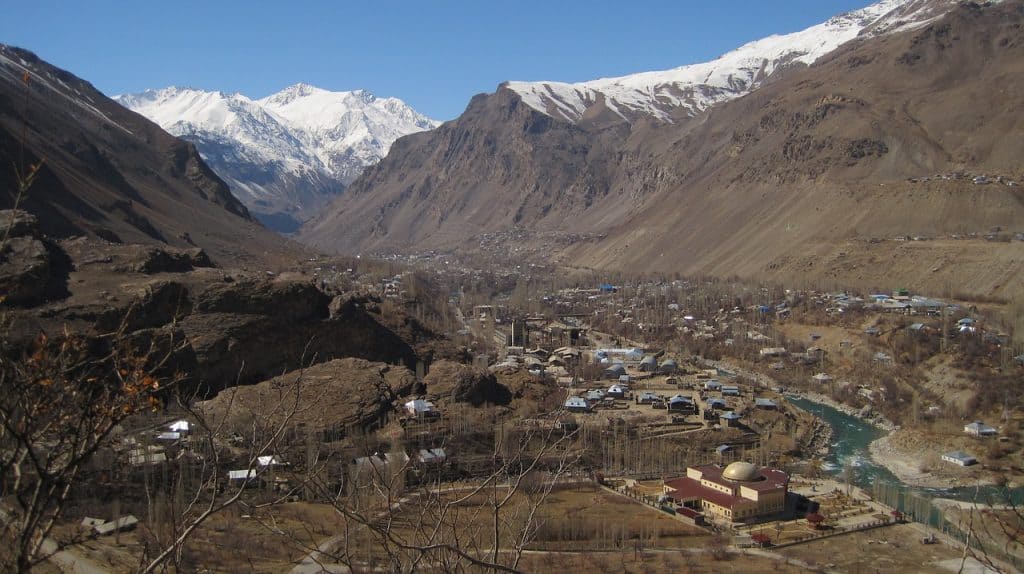 Tajikistan in recent years, increasingly becoming the target of trekkers, adventurers and mountaineers course. Strongholds, resorts, recreation centers and sanatoriums offer their valuable services to send a soothing treatment stressed-out tourists. In 2018, the tourism industry of the country has recorded at least more than 20,000 guests from Europe alone, and rising. Most of them came from Germany, Switzerland and Austria. In particular demand the so-called ecotourism, rafting, mountain climbing, cycling and motorcycling are.

Tajikistan still is a remote, unspoiled region, far from any industry and pollution. Not even the climate has discovered the hidden land between the mountains for themselves. So Tajikistan is a suitable piece of unspoiled nature for those who want to escape the "Stadtneurotik" at least for a short time to recharge their batteries exhausted for the next battle in overtightened civilization.

"Good things come to those who wait"

The "Switzerland of Central Asia" is determined to expand mining and ecotourism. Your biggest in literally attraction is of course the Pamir Mountains. In order to accommodate tourists visa and health resort fees were just lowered significantly and generally facilitate the entry. The Government of Tajikistan has understood that tourism can be a very serious economic factor for their country. Therefore, the new E-Visa system was introduced in 2016, whereby the procedure to obtain an entry visa was clearly simplified. First luxury hotels are already grown in Dushanbe from the ground. The biggest teahouse of Central Asia, which is currently being built there to provide about 3,000 guests.

The entry for German nationals is possible with the following documents:

Comments: All travel documents should be valid for at least six months after the scheduled entry.

For stays up to 45 days with single entry and exit, is an electronic visa online e-Visa to apply. It is important to the correct specification of the number of German passport. The fee-based e-visa is sent via e-mail, print it and must accompany them during the trip. The trip should be started not when the visa was not issued. An e-visa can not be extended during their stay in Tajikistan.

For longer stays or stays that require multiple entries and exits, is a visa through the Tajikistan Visa Electronic Application Center to apply. It also these are a paid online procedure. The application is first pre-tested; then the applicant must personally audition for the Tajik Embassy in Berlin to provide fingerprints and to produce a biometric photo.

Detailed information about the visa application process is available on the website of the Tajik Embassy in Berlin to find.

- Advertisement - Like this item? Yes! You want to read more articles from us? Yes! You want us to continue in Adeba? Yes! Then please support our project with a donation for the coffee cup in recognition of the many authors. :-).
Previous Item36 weeks - 36 weeks
Next articleWhat is the best age to get pregnant?
- Advertisement -

Explore Norway with family and raving

Cyprus - island of myths and legends

- Advertisment - Like this item? Yes! You want to read more articles from us? Yes! You want us to continue in Adeba? Yes! Then please support our project with a donation for the coffee cup in recognition of the many authors. :-).

More by this author

Since the publication of the manuscript and interviews at “Der Mittelländischen Zeitung” DMZ, my office has turned into an international “virology center”. In addition to ...
Read more

Broken-heart syndrome - the broken heart as the cause of death?

Can you die of a broken heart or is it just a fairy tale? Broken-heart syndrome is a serious disease that affects women in particular.
Read more

4 phases of the financial crisis - First phase 2 - What to expect in the last phase!

Summary for those in a hurry: Dr. In this guest contribution Daniel Stelter describes the 4 phases of the financial crisis, i.e. the current crisis, and shows ...
Read more

“We need effective solutions for this important topic. Instead of continuing to look away, it is now necessary to take a look ”, Julia Bleser, who as coach
Read more

The content of this website has been compiled in good faith, but we do not vouch for its accuracy. Is explicitly warned against self-diagnoses and therapies based on these pages. The contents are solely as in-depth or laienverstaendliche general information on the topics of pregnancy, birth, babies, toddlers and family.

If you have health problems this site can not replace a doctor's visit in any case. Applies you please be sure in diseases or ambiguity to a doctor of your trust.

Adeba.de there since 1997 and is one of the oldest sites devoted to fertility, pregnancy, birth, babies, toddlers and family. With large forum and lots of privacy.

Independent and neutral. It is a purely private project, which is intended as an aid for many mothers in German-speaking countries.

© Adeba always there for you.